Wow! I was so nervous about heading to the other side of the green line, thanks to all the fear mongering from the media and people I had met. Boy, were they wrong. The people of Palestine were amongst the warmest I have ever met. I stayed with Ibrahim and his wife Aya in the Dheisheh Refugee Camp. Gotta love Airbnb, they really do give you the local experience. This couple bent over backwards for me and ensured my every need was met. 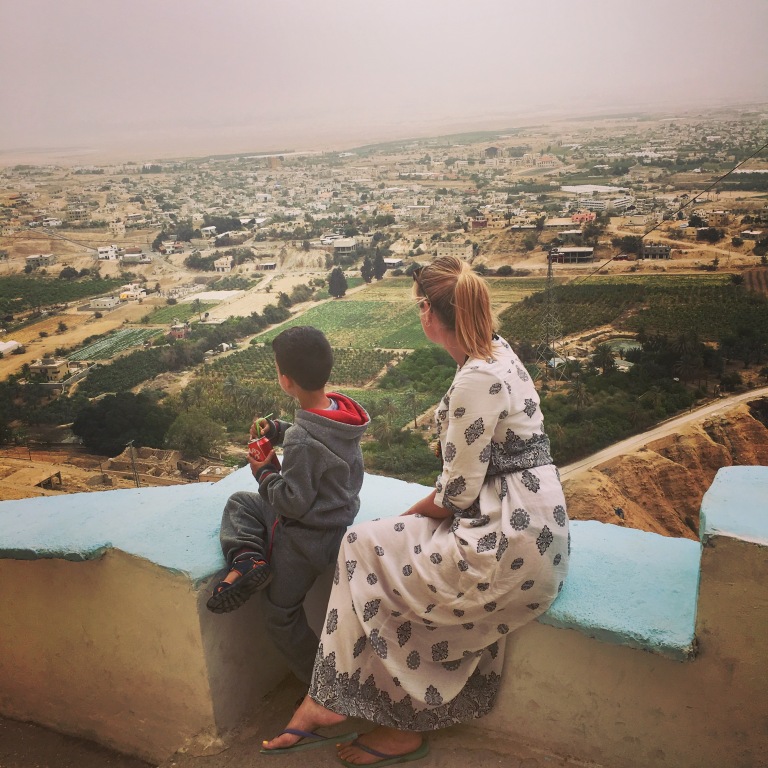 Ibrahim was also a driver and he took me exploring to Jericho, the Dead Sea and St George Monastery. He also wandered the streets of Bethlehem with me for hours to show me the other camps, the wall and some other key places that highlight the history and struggle of this region. Upon arriving, Ibrahim met me at the checkpoint where the other taxi drivers had rustled me up a seat in the shade while I waited – far from the harassment promised by the naysayers.

Aya had gone out so I was dropped to her at her mum Afaf’s house, where the whole family greeted me. Shisha, tea and cake, it was Abdallah’s (Aya’s brother) birthday and I slotted in like I always belonged there. No sign of feeling like an outsider, no awkward stares or questions on why I wasn’t wearing a head scarf. Just warm Palestinian hospitality from a wonderful woman and her tribe.

I asked probing questions on the occupation and their thoughts behind that. Speaking freely Ibrahim and his family (he is one of 14!) told me of the struggle of their family after his mother died when he and his siblings were still little and how the Christian brothers and sisters had taken a few of them in to school them and shelter them too. They told me about their land and villages that have since been occupied by illegal Jewish settlements and how they wish to return Insha’Allah (God Willing) and that that day will come.

The Dheisheh Refugee Camp came into existence 70 years ago when the UN leased the land for the displaced Palestinians and hosts 13,000 people today. Ibrahim advised that the UN holds a 99-year lease to this place so they feel secure for now. “But what happens after that?” I ask. “No one knows,” is his reply, with a distant hint of defeat. Aws and Ayham, his beautiful boys, greeted me daily with kisses and cuddles and loved to sit with me as I wrote in my room in the mornings.

There was a family get together nearly every night, one evening Ibrahim parked the car and ushered me in. I waltzed in to the house of his brother whom I had not yet met, I did meet about 30 members the day before at dinner but not this one. As I entered, a band of men looked up at me (the blonde stranger). I uttered a confident Salam Alaikom and one of the women from the day before came out to greet me with a joyous and enthusiastic smile. I felt like I could read the minds of the men (who is this chick, oh well she’s here now… tea?).
We sat in the back room (the second lounge, and as in all Arab households) and the food just kept coming and the giggling and chatter of the women competed with the stories and laughter of the men in the other room. Not segregated on purpose or for tradition, more like when you’re at a barbeque and the men stand by the fire with their beers and the women chatter by the salads. Same thing here, men and women float between the two rooms casually. I’m happy to be in my section, because we’ve got the kids and they are so adorable.

I was so impressed with the openness of this family and the no-nonsense approach to their lives. They are not in the best situation; they are treated as second class citizens in their own land. Aya is not permitted to enter Israel. No explanation, just not permitted, and Afaf explained to me the heartache of losing her husband due to the restriction on his identity card which resulted in him succumbing to his heart attack at the checkpoint whilst the soldiers held back his ambulance. It’s a total breach of human rights here yet no one can enforce the law which has many infringements here. Despite all that, they laugh, play and crack on the best they can and I admire that greatly.

A Muslim family who hold their belief in Allah and the teachings of Mohammed proudly whilst not being dogmatic followers, they discussed religion openly with me and took me to meet a Christian Brother, Joe a founding member of the Bethlehem University among others for my Faith Chat collection for YouTube. Nothing was a bother and I still chat to them every week. 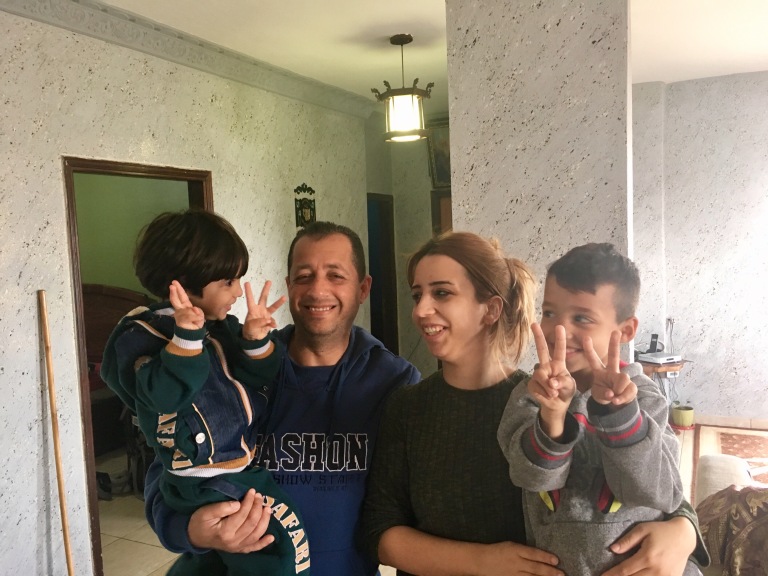 If you want to go to Palestine, my advice is: don’t hesitate. Go. It’s safe, it’s beautiful, the people are amazing and the food is to die for.

On an exploration into Buddhism, I head to Thailand; one of the biggest Buddhist populations on earth. I seek the local’s way and I stumbled across Aoluek Paradise.

Inland from the beaches of Krabi I spent a serene week there in what was supposed to be rest, relaxation and writing. Which was all three, but also an eye opener into the life of a local and how spectacular the scenery really is in southern Thailand.
Greeted with my name on a sign at the airport (a complete rarity when you’re a backpacker), Kowit’s place is an hour out of town and set in the jungle.

I arrived to a bamboo loft style bungalow and settled in for the night listening to the frog’s melody and leaping with excitement at the sight of the fireflies. I’m there to finish my manuscript and what a find. There isn’t a tourist for miles and Kowit and the gang prepared three square meals a day for next to nothing, all delicious and spiced to perfection. 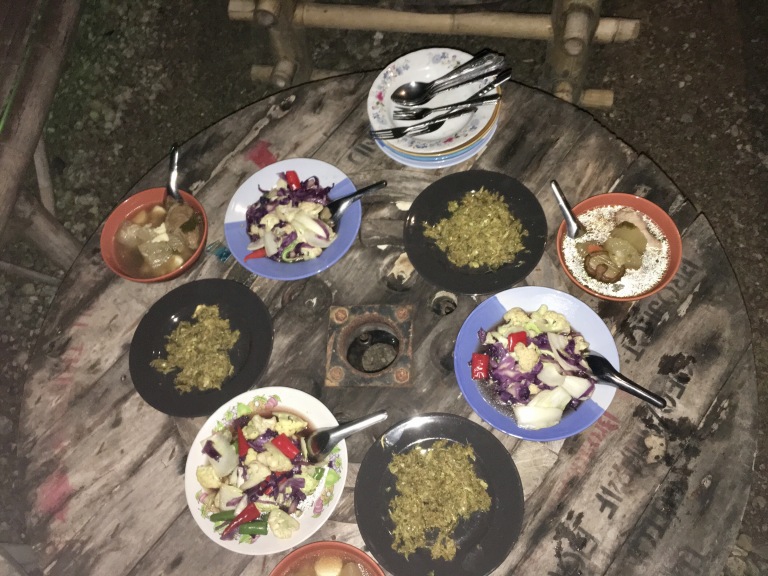 In between chapters I roam freely along the grounds and even sneak out for a day trip to completely deserted islands along with my fellow guests, the Danish couple who are Middle Eastern and the gorgeous girls from Singapore and our mellow French guide who went to Thailand to volunteer for a month (six years ago). With literally not another soul in sight, we ate our prepared lunch on the deserted beach, frolicked in the pristine waters off the bay and lay on the bough of the boat to watch the sunset. It was an incredible day and probably the highlight of my trip. I will always remember it for the simplicity of the day, the spectacular company and the breathtaking scenery we had all to ourselves.

I visited Phi Phi during my trip and yes, those islands are technically more beautiful but for the price of wall-to-wall tourists, I’ll take Aoluek’s day out every time. 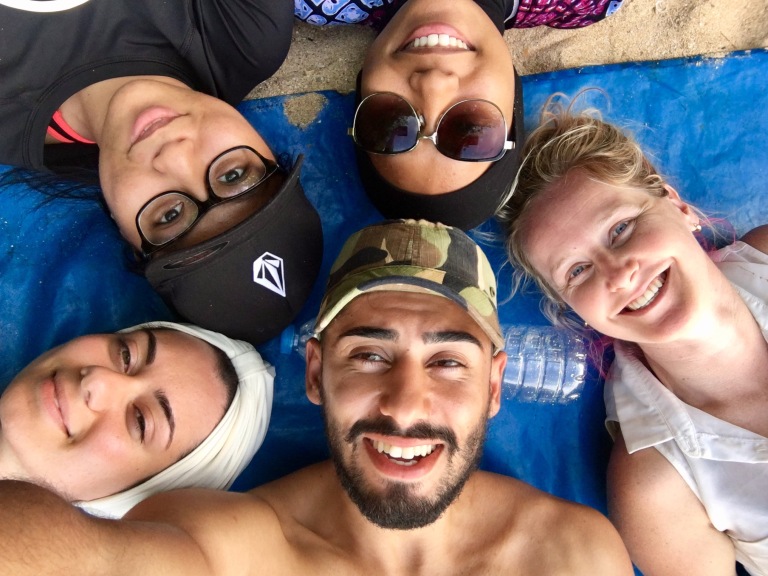 At night, we sat by the bar whilst Kowit entertained us with his many talents. Fire twirling, tight rope walking and a seasoned muso who made the Thai melodies float over the lake into a dreamy backing track to our family dinner. 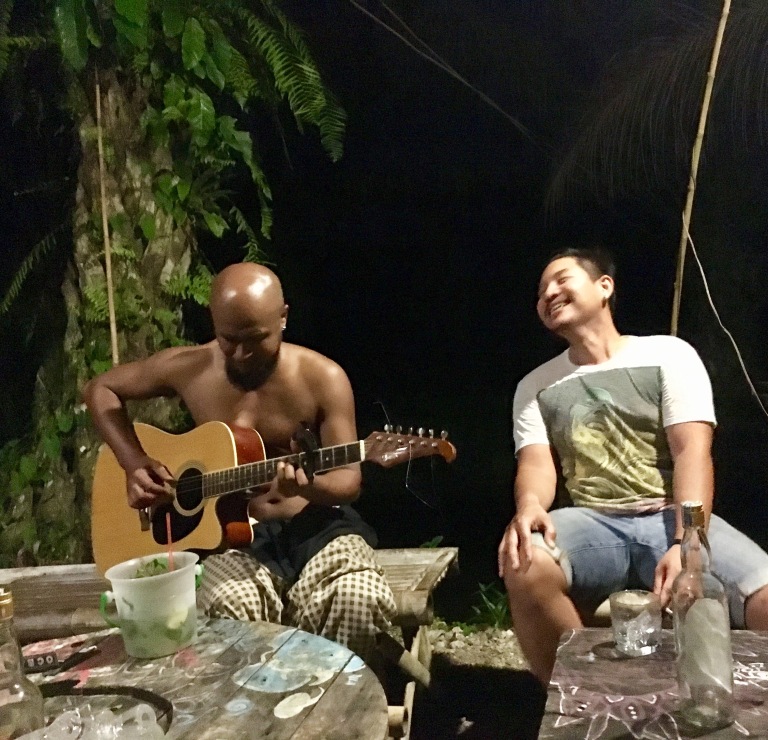 There were temples nearby which I explored and tried to understand the importance of Buddhism and heights, given the 1300 steps to the Tiger Cave Temple. (Apparently immense beauty and isolation provides the perfect place for meditation). Worth all the sweat and hyperventilation to capture the views though and perhaps if I was a revered enlightened one I would want to be enshrined in places this beautiful as well. 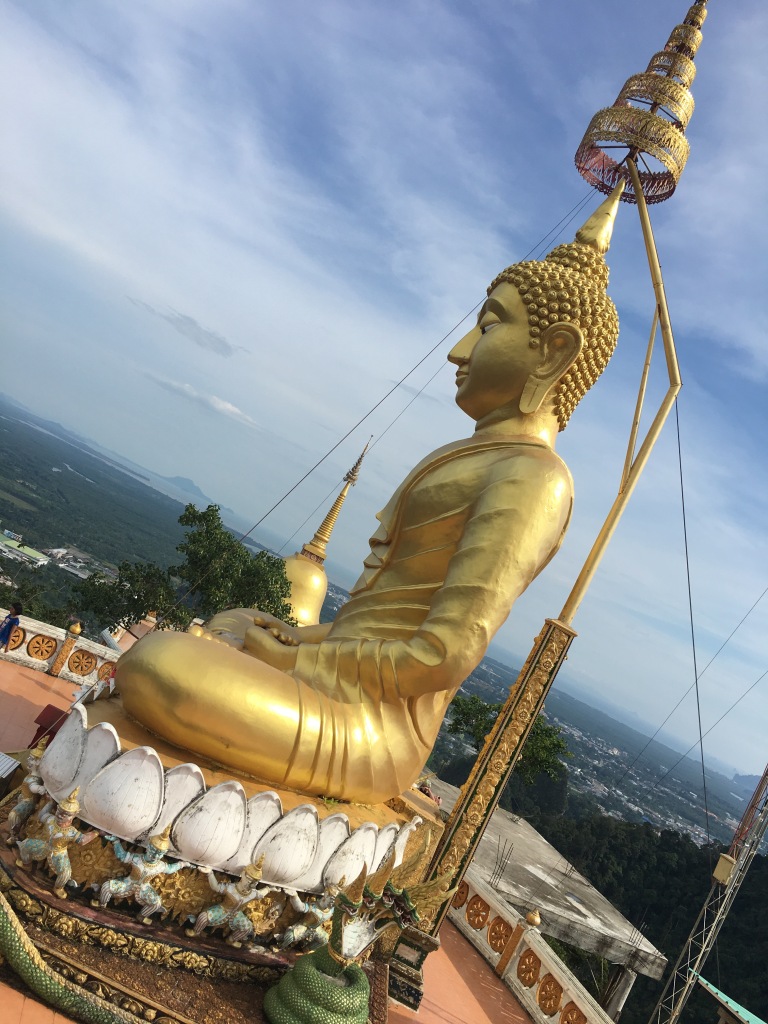 I highly recommend staying out of the fray in Krabi and dropping into Phi Phi for a day trip for a look then back to the serenity and local hospitality of Aoluek’s paradise. The place where my first manuscript was finished. OMG! Coming soon!

Thailand – the Theravada Buddhist capital of the world. I arrived in Chiang Mai for the most holy day in Buddhism – Vaisakha. The day Buddha was born, found enlightenment and died. Years apart of course, but miraculously on the same day of the same lunar month. 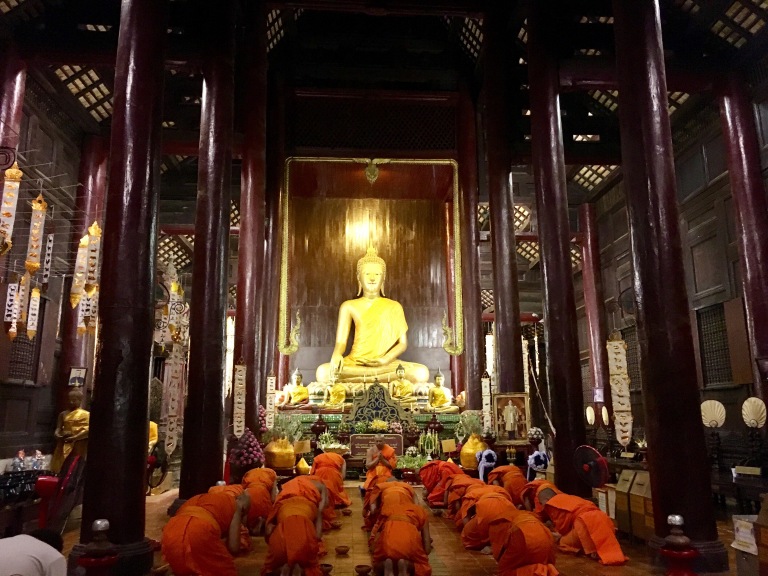 In Chiang Mai, the tradition is to walk 17 kilometres up Doi Suthep Mountain at night to arrive before a dawn ceremony begins. I braved the hill and all throughout was greeted by volunteers giving away free food, ice cold drinks, sweet treats and words of encouragement to the tens of thousands of pilgrims who ascended together in a steady stream to worship Buddha on this important day.

Tired and weary I arrived to a sea of foot massage stalls set up on the street – yes please! Also, to the crush of the crowd adorning the serpent stair case to the temple. After a snail paced crawl up those 300 steps I arrived at the glittering gold monuments of Buddha. I took my incense, candles and lotus flower and offered them in thanks to the statue and prayed for mankind, given I think we need it sometimes. People were strewn about getting a little bit of shuteye before the rain came down and the ceremony was done.

I escaped to the safety of the Songthaews (Red Truck Transport) thanks to my sneaky leap into the standing room only section (aka the step outside clinging to the roof racks but at least I’m dry.) In the traffic a young man insisted I swap with him and he braves the elements. I like that the entire town came out to this event and it had all the spirit of Chinese New Year, with dances, and singers/bands along the journey and makeshift temples and monks handing out blessings via holy water and white cotton bracelets (sai sin). This bracelet is for health and protection, my two favourite prayers and white to signify purity. I thanked the monk who gave me mine and continued up the mountain.

I slept through the morning rituals after getting back to my homestay at 7am and woke just in time for the candle ceremony at Wat Chedi in downtown. The city’s most popular temple, the ceremony was simply gorgeous. Monk’s chanted and prayed with the crowds within the temple and I’m reminded to light my incense and candle again ready for the Wien Tien (Walking Circulation of the temple three times. Three – of course!).

Then we all gathered out in the grounds and the monks led us into a garden on the lake with their candles and blessings while the crowd watched on in silence. This ceremony was again in memorial of the ‘Enlightened One’ and whilst it was beautiful, it was also ceremonious and full of tradition. 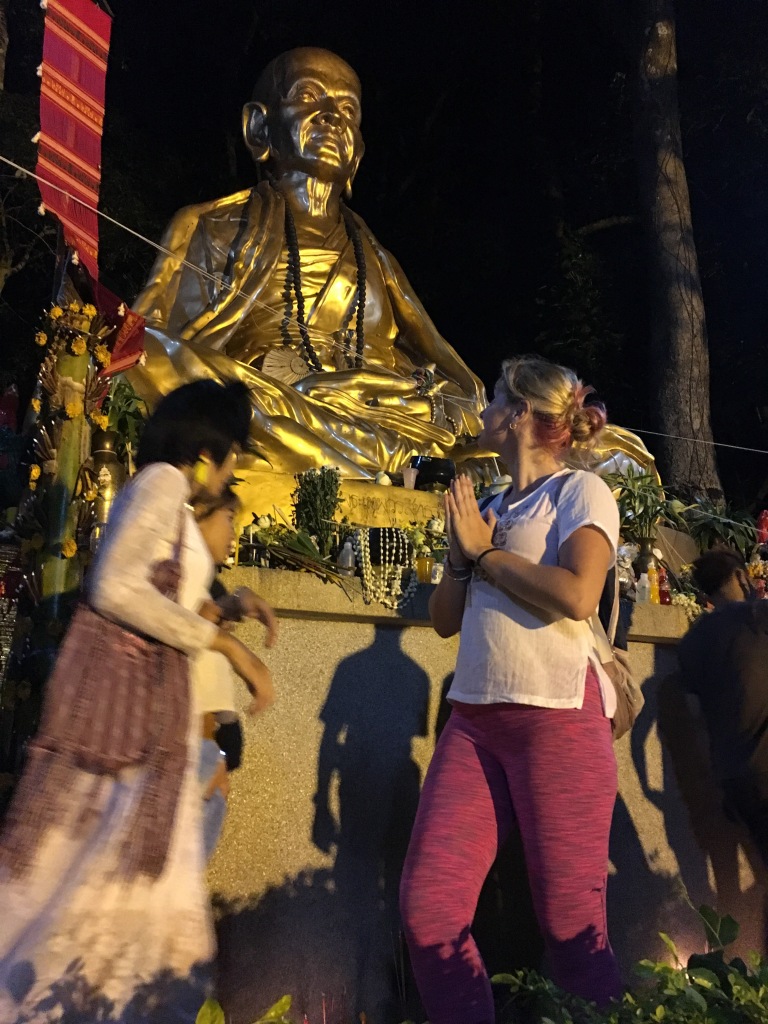 I keep thinking, but he’s just a man. Maybe the monastery will have the answers.