In Sao Paulo, a giant replica of the original Temple of Solomon has been erected by the evangelical Universal Church and Kingdom of God. It seems to be encased in controversy here in Brazil and outside and my research brought up quite nasty headlines and articles, so I thought I’d see for myself. I was initially a bit apprehensive given the amount of security and the preconceived notions I had from my research. Yet I found a lovely pastor visiting from India and the reception lady was very helpful and arranged an English-speaking tour of the tabernacle later in the day. Flavia was very knowledgeable and answered all my questions on my private tour of which two other men did accompany us, which felt odd. He humoured my questions about the synergy of certain aspects that seem to crop up in lots of religions like the numbers  three or seven, for example. The replica tabernacle erected was interesting, not spectacular, but I understand its purpose as a prop to the story of Moses, the tabernacle and the temple, so that was fine. 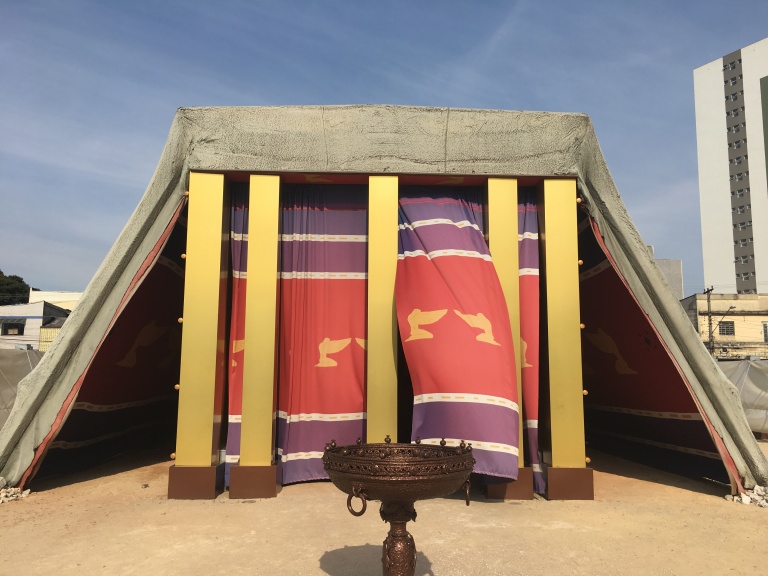 What lingered eerily in my mind (which I did question Flavia on was that after two hours touring a visit to the tabernacle and impressive memorial, it felt like I had just visited a Jewish Museum. So why did a Christian organisation spend $US300 million of their and their congregation’s money on building what felt like a shrine to Judaism, in Brazil of all places? His response was simply to remind people of God our saviour, a bit weak I thought. The stones were imported from Israel, the specifications, word for word, were from the old testament, yet scaled up five times. (Was that necessary?) Olive trees were from Mount Mariah. I’m open, it’s glorious, but why? If a Jewish movement built it, I’d get it, but to me it’s a bit like a Buddhist sect in Australia recreating the mosque of the dome of the rock in Sydney . Okay so Islam, Judaism and Christianity are all Abrahamic religions but still, I’m lost. Any ideas? My research continues…

What happened next was what blew me out of the water! I decided to return a couple of days later to attend a service and the night-time service was the busy one. Wow! I approached and was ushered towards an English speaker who took me underneath the courtyard where all electronics and food must be deposited (no phones). Led through a thorough search with full pat down and I was asked to taste test my two water bottles (excessive?). This is Brazil, but I’d wandered in and out of mosques, churches and a temple already (feeling sceptical at this point). We entered, (I’m still being escorted) we ran into Samuel the Indian pastor and we sat together where we could listen to the English translation. Was he there by accident or am I being paranoid? It started! Boom, the preacher (bishop) entered the stage of this monumentally large room with a replica covenant at the front of the room and imitation columns at the side. The décor, whilst grand and lovely, felt almost like a church themed conference hall, beautifully modern, but I’m a sucker for the grandeur and detail of old historical churches from days gone by. Perhaps this interior will be admired in 500 years’ time by faith writers of the future. The outside certainly will, it was just an odd contrast, but maybe that’s just me?

Like any service, prayers were said, songs were sung and the energy of the congregation was one of light and love. Until I heard what sounded like screaming coming from the other side of the hall muffled by the translation headphones I was wearing, then suddenly like the climax of a scary movie, I looked up and on the screens you could see the bishop addressing a woman vehemently. She looked like what appeared to me like Sigourney Weaver at the end of the movie Ghost Busters. This was an exorcism in progress (oh shit!).

Samuel the Indian pastor had already headed to the front to participate in praying over the congregation at the front and was feeling very far from home. The bishop was shouting through the woman to the demon in her and whether I subscribe to the belief that this woman had a demon inside her to address it, it certainly looked that way. She looked dishevelled, eyes red and erratic, her voice was soft, yet was a violent whisper when responding to the bishop. Meanwhile the entire congregation of about 6000 held their hands up towards the woman and shouted something in unison that translated in my ears as “GET OUT!” It was surreal, I was frightened as I prayed to God for protection and the fanfare of it made me question the authenticity, but Brazilians are quite forward in most things and the same can be said for many rituals in many religions, ‘Eid sacrifice, Holi among others’. Ten to 15 minutes passed (it felt like a lifetime) and it was done. The woman had been delivered from her evil and was now debriefing with the bishop. She looked completely different, refreshed, kind, and elated. 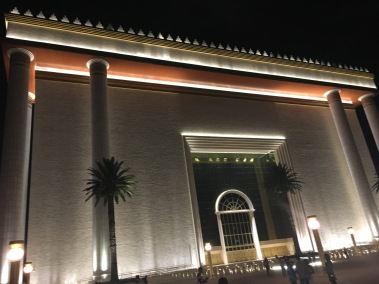 I probably looked disturbed when Samuel returned. “Let’s talk about what just happened there after; shall we Sam?” The rest of the service was as expected, a well-delivered sermon, inspired reflection on the topic of relationships. It was a relevant and engaging message by the bishop, co-hosted by his wife. I really enjoyed it but was also coming down from the opening events.

In the week following this encounter I have been challenging my response and view. This was a very different experience for me. It was new and it made me nervous, however I was the only one, everyone else was fine, everyone else was participating. Should a Muslim enter a temple at Galangun in Bali and witness the slaughtering of a pig, they would be horrified. Similarly, if a Buddhist attending the sacrifice of Eid in a mosque, I imagine appauled is how they would feel. And yes, this Christian was overwhelmed in witnessing an exorcism in the universal church but that doesn’t make any of those rituals less valid than another. It opened my eyes and I will attend the universal church more. This experience has challenged my pilgrimage, it’s challenged me to commit to have an open heart and open mind, even when I am apprehensive, because again, the similarity is there. Shocking and confronting, but deliverance is present in at least four of the top six religions that I’m researching. And that’s ones that I know of.

Mmm…let the adventure continue – next stop is Carnival, which is probably a good thing. I need a beer!